How can you feel ‘stable’ living in a box truck?

Ironically, I feel much more stable in my new home than I have in a long time. Because it is MINE and because if I do have to ‘move’, I am basically like a turtle now, I take my home with me. Life is good!

Interestingly enough, I have found the ‘Tiny House Movement’ is not so tiny itself. There are also several variations of simpler living and just as many reasons. Some people want to downsize while others must. Some people have the means to create or purchase a smaller living arrangement and for others, even a clean dumpster might be a safe haven as it is better than a cardboard box or a cold hard sidewalk.

Before I bought the truck to fix it up, and before I found my former roommate, I was seriously considering living out of a storage unit. I say ‘living out of’ because you can’t sleep in them; at least you’re not ‘allowed’ to. My plan was to put everything I owned in a storage unit and arrange the space such that I could have a desk/office type work space there. I would go there and work on my writing only when I wanted to. When I wasn’t at work, I had planned to be either at the community center, library, laundry mat, or the gym. I had gone so far as to get a storage unit, put all my crap there, and join a gym. I was going to ‘sleep’ in my car. Interestingly enough, when I announced this plan to the guy at the gym who signed me up, instead of being shocked, he held out his arm to shake my hand. I was the one who looked surprised. He explained that he lived in his car in that very parking lot for four long months. He said he took a shower at that very gym for the interview for the job he now had at the gym. He then proceeded to give me tips on how to stay warm during the winter. I felt very comfortable with my new plan.

At the very last minute I found an awesome roommate with a nice space I could rent for an affordable price. He was awesome. Well, he still is, but shortly after I moved in, things started heating up between him and his girlfriend and I saw my future was not very ‘stable’ at all…again. Thankfully, he allowed me to work on the box truck at his place, and gave me ample time to get the project done, and even helped me on it a fair bit. This alleviated some of the anxiety over feeling ‘displaced’ again. As much as I wanted to be in control of my own destiny, I also did like living under a real roof, with real plumbing and a cool human being for conversational sake. 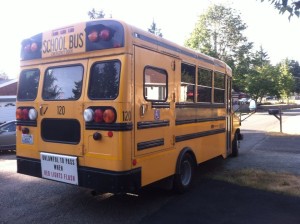 As I worked on the box truck, people popped up from everywhere with similar alternative housing arrangements. A guy I used to work with shared with me that he lived in his car for a month. A woman who came to buy one of my dressers I was getting rid of showed up in a short school bus to pick it up. I told her about my box truck, showed her my progress, and she said that was exactly why she bought the school bus; to fix it up and live in it. I stopped at a yard sale to look for storage options/containers and the woman asked me if I was looking for anything specific. I told her that I needed unique storage ideas and why. She said her and her husband were having the yard sale to get rid of everything they own and buy a van to live in it. I learned that a girl I work with lives in her van with her big dog. She has been living in it, with no kitchen or bathroom for four years, and started living in it in Alaska! One of the guys I hired to help me panel the ceiling in the truck informed me that he AND A FRIEND lived in a storage unit for TWO YEARS. He said they had BBQs with the owners of the place even. Another guy I hired to help me with the custom bookshelves and counter top said he was homeless for about six months and he would have killed for a space like what I envisioned while we were making it a reality as we spoke.