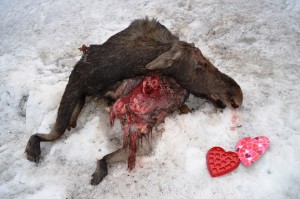 Olivia met Logan while grazing on a few corn stalks still poking through the winter snow at old man Tomahawk’s farm.  She was immediately smitten with him when he strutted his long awkward legs over to her and said “If you were a chicken, you’d be impeccable.”  Olivia turned her head so Logan wouldn’t see her roll her eyes at the corny line. She then sheepishly dropped her head down a bit before rolling it back up to bat her eye lashes at this handsome bull.

They went on a few dates taking turns standing in the middle of the road stopping rush hour traffic and strategically placing themselves between a house and a human’s vehicle right about the time they were already late for work.  They would later share swamp water sprinkled with lily pads while giggling obsessively at how frazzled humans would get when they were in a hurry to go to their silly jobs.

It had been a few weeks since they were meeting regularly so being Valentine’s Day, Olivia thought she would pick up a box of chocolates, bring it over to Logan’s little patch in the woods, and ask him to be her Sweetheart.  She wasn’t exactly sure where his patch was so she asked a few neighbors along the way.  Olivia asked Mr. Rabbit and he stood up on his hind legs, cocked his head to the North end of the field and said “Over hare he be”.  She wandered around the border of the fence for a bit when Miss Fawn sprung over the barbed wire clearing it like a future Olympian.  “Doe you know where Logan’s patch is?  Would you be a deer and point your cute little white tail in the right direction?”  Miss Fawn wiggled her little tail gleefully and then did her best to point it toward the creek.

Olivia was tired from her long journey through the snow, but she was so excited to see Logan and ask him to be hers that her legs were almost knocking with nervousness.  She was about a tractor and hay wagon length away when she saw him lying there…with Marissa, the neighborhood skank.

Her legs wanted to give out and let her body cower down to the freshly fallen snow beneath her belly, but she knew if she went down, she’d lay there crying till morning and probably wake up stuck in a sheet of ice from her tears; how embarrassing that would be.  She then instantly got mad and thought of rushing into Logan’s patch and tramping the tramp to a bloody stump of moose mush mash but in a moment of clarity, thought it would be a waste of time.  If Logan wanted to snuggle up with stupid Marissa instead of her, then he didn’t have much more than an acorn for a brain under those antlers anyway.

As Olivia meandered back to her lonely patch, she began to think about how many Valentine’s nights she had spent alone, always disappointed by having her hopes of finding love, gnawed up and spit out like cud.  She began to cry.  The adrenaline from her anger kept her warm enough that it prevented the tears from turning into icicles on her long face as she kept moving along.

Through her alligator tear filled eyes, she saw the big metal one-eyed worm was coming.  She knew just what to do.  She opened the heart shaped box of chocolates and started popping them into her mouth as she galloped toward the giant orange worm.  She was tired of being the good cow.  She was tired of bulls turning on the charm just to cast her aside for an easy lay.  She was tired of having a broken heart.  As she popped the last chocolate into her mouth, she clenched the empty heart shaped box close to her own crushed heart, stepped up into the worm’s path…. and waited. 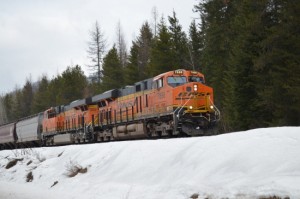 Byron had just passed his last switch before his final stop in Sandpoint, Idaho where he and his sweetie live.  He glanced over at the Elmira Store and Café to see if he recognized any cars in the parking lot.  He had a little ritual if he saw a redneck looking truck parked out front.  He would break into his best rendition of a back woods twang as he would say out loud just to hear his voice over the clanging of the rails, “yuuup, gunna get me some bullets ‘n burgers before I go hunt’n up North ‘der.”

This little Elmira one-stop-shop has been around since 1901 and has bragging rights on having the best burgers around.  They buy their organic beef from a family just 10 miles down the road; you can’t get much fresher and local than that.  The store sells just about everything you need including bullets, which keeps the local militia in all smiles showing off their semi-toothless grills deteriorated from chew’n since they were toddlers.   They also have a little post office so if the locals are bored and their favorite Huckleberry Fin book has not been returned yet from the little honor system book swap, they can send prank letters to people asking if their refrigerator is running.  They might be a little slow around them parts, but they make a damn good burger!

Meanwhile, Bryon let his mind slip into neutral for a moment as he began to daydream about the evening ahead that he had been planning since Christmas.  He and Heather had been together just shy of six years and he thought it was about time he took the plunge and asked for her hand in marriage.   He had made reservations at Trinity at City Beach and not only asked for the best table in the place, as if you could pick a best one – they all had a view of Lake Pend Oreille, but he had already pre-ordered their meals.  He would have the Hazelnut Crusted Trout and she would have her favorite dish, the Huckleberry Pork Cassonade.  He decided to skip the appetizer to make sure they had room for dessert as that would be the kick off leading to the big question.

Byron found out that Bruce Bishop would be playing his melodic guitar on Valentine’s night so he crashed the Poker game that he heard Bruce would be at.  Between hands, he and Bruce laid out plans to help him pop the question.  Bryon slipped deeper into thought as he continued reflecting about how perfectly he had planned out the evening.  Just when Bruce saw the waitress set down the dessert plates, he would glide across the room as if on a silent conveyer belt and start playing Heather’s favorite song, “She don’t use Jelly” originally done by the Flaming Lips.  He would play the song beautifully just for her.

As Bruce softly sang the last verse of the song:

She don’t use nothing – That ya buy at the store

She likes her hair to be real orange – She uses tangerines

Byron thought so vividly as he was humming the tune which blended in with the rhythmic rocking of the train, he would take his napkin from his lap that had been hiding the little black box and stealthfully place the napkin on the table.  Heather wouldn’t notice a thing as she would be completely distracted by Bruce’s big wood…guitar and limber fingers (for some reason it turned Byron on a little to watch her drool over another man; maybe it was because it made him feel proud he was going to be the one sleeping with her every night.)

As Bruce strummed the last chord, he would disappear into thin air (hey, things like that can happen in a daydream).  Just then, Bryon had to laugh out loud at the daydream that was completely serious until it went ‘poof’ with his buddy Bruce.  He hunched over for a well-deserved belly laugh and as he stood back up, he saw Olivia standing on the tracks…waiting.